The 2022 SRS AGM in Words and Pictures

Due to Covid 19, this was the first Society AGM since 2019 to be held in a traditional manner. With the Hallmark Hotel in Derby currently unavailable, the 2022 AGM was transferred to Crewe Heritage Centre although this meant we were unable to hold our gathering in close proximity to that of the Austrian Railway Group. It was decided to dispense with both a Friday evening talk and the formal Saturday evening meal and talk.

About 100 people signed in and some 70 members attended the AGM itself. Four layouts were on view in Saturday’s exhibition. John Brightwell brought his N-scale “Alpenbahn and Gordon Wiseman exhibited his N-scale “Chamossaire” influenced by the SBB/BLS. “Santa Maria”, an HOm layout with an RhB theme, was shown by Dan Spalding and Axel Klozenbuecher exhibited “Preuninger Alm”, his HOe Austrian layout, although unfortunately damage in transit made the layout inoperable on the day. John Evans brought a display of over 50 models of Swiss postbuses. There were several trade and Society stands. The former included Contikits, NScaleCH, Hornby International and Gerald Savine. The Italian Railways Society had a stand and we discovered the answer to the long-standing question “Where’s Heidi?”- as she was present with her partner and father (Tony Bagwell) running a family sales stand. The SRS’ customary Bring & Buy stall was supplemented by a stand offering surplus publications collected in the course of work on the Society’s archive. As usual on these occasions, the Society’s Sales stand had a range of products, including the new book about Swiss steam locomotives.

The Chairman, Roger Ellis, noted that in the three years since it had been possible to hold a conventional AGM,  a number of members had sadly passed away including Brian Hemming, Jan Howsam,  Bryan Stone and the society’s President Alan Pike. During the pandemic, the Board had agreed the award of honorary Life Membership to Malcolm Bulpitt and John Jesson; the present meeting was the first opportunity since to thank both for their service to the Society. Roger also thanked Glyn Jones for arranging the present event and Pam Jones for running the reception desk and taking a note of the formal meeting. The minutes of the 2021 AGM were agreed by the meeting, as were the various reports by directors and the annual accounts for 2021. It was also formally agreed that Giles Baker be appointed as auditor for the 2022 accounts in due course.

When presenting his own report, the editor, Bill Salter, said he acknowledged some members had continued to have problems with envelopes used for mailing out Swiss Express but it was his intention that envelopes with a wider wrap be used for the June edition. The Chairman said it would be good to appoint an Assistant Editor, partly because of the overall workload but also because there was no cover should Bill become indisposed. Bill’s role now extended to publications as the current programme was approaching an end. Members were invited to come forward with ideas for new subjects (whether for books, magazine supplements or conventional magazine articles) and, indeed, volunteers to research & write these would be most welcome. The Chairman emphasised that back-up was available from Board members who had experience with this work.

There were no changes at the AGM to the composition of the SRS Board or of the editorial team for Swiss Express although changes taking place later this year were announced. Nominations will be sought in the usual way for the 2023 AGM for the posts of Chairman, Membership Manager and Director of Publicity & Exhibitions although the current postholders are willing to continue in office. Glyn Jones will be standing down as the Sales Director (but remain a Director for website matters) and Gary Eldridge will be co-opted by the Board in July to run Sales. In October, I will stand down as Company Secretary and Hywel Rees will be co-opted to take on that role. It follows that Gary and Hywel – both of whom were introduced to to members at the AGM – will stand for election when these two posts are also advertised in the run-up to the 2023 AGM. The Chairman noted that Glyn had been the Sales Officer/ Director since the AGM in 2000; an astonishing achievement for which the Society was very grateful. David Stevenson’s intention not to seek re-election as the Archive Director remains but, assuming no one comes forward in the meantime, David indicated he would be prepared to remain in post until his term ends at the 2024 AGM.

The formal meeting closed at 13.40 but there was then an Open Forum which included the following:

The 2023 AGM
The 2023 AGM and Spring Meet will be held on 29 April 2023 but the venue has yet to be decided. The Board needs to take stock of how things went in Crewe and what other suitable alternatives there are. An announcement will be made as soon as possible on the website and then in the September Swiss Express. It is hoped the usual traders will attend and that there can be 5 or 6 layouts in attendance; any offers of layouts, demonstrations or displays will be gratefully received. For any queries please contact agm@swissrailsoc.org.uk.

The AGM Brochure with reports and accounts can be downloaded here

The AGM Meet in Pictures

(All photos by Martin Fisher and Glyn Jones – click on photos to enlarge). 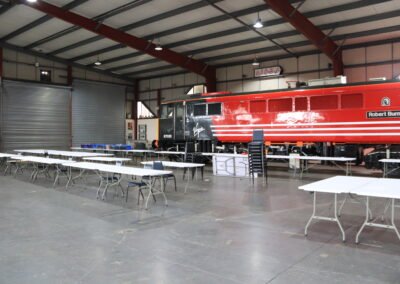 AGM Room before the traders and layouts arrived 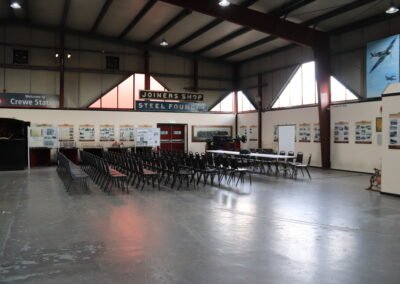 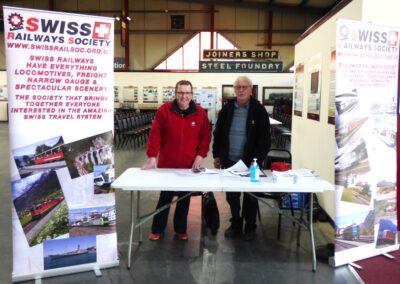 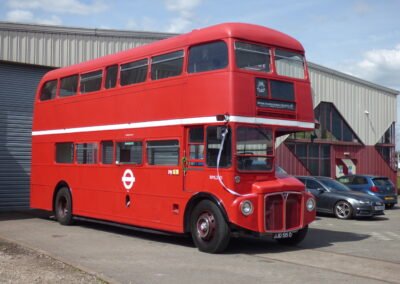 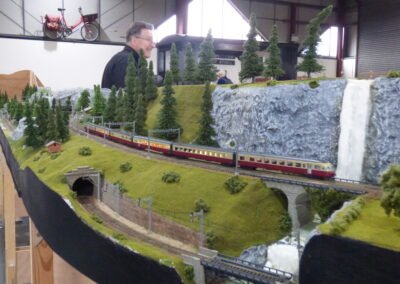 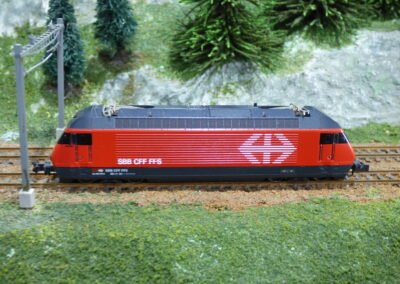 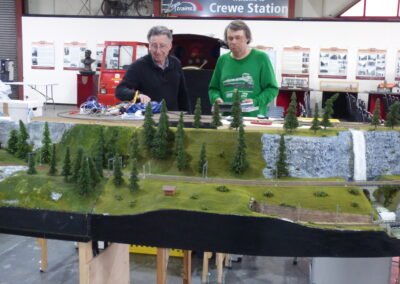 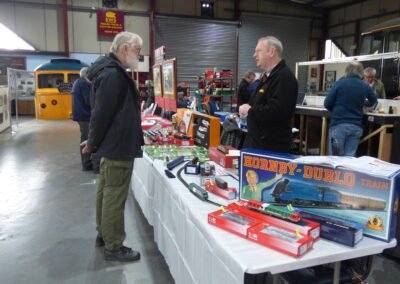 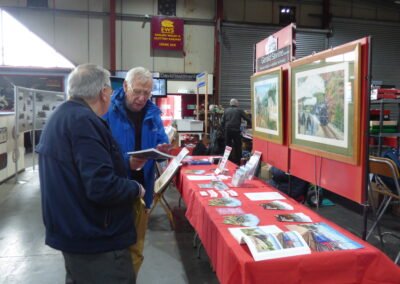 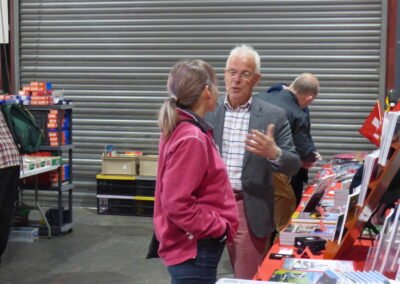 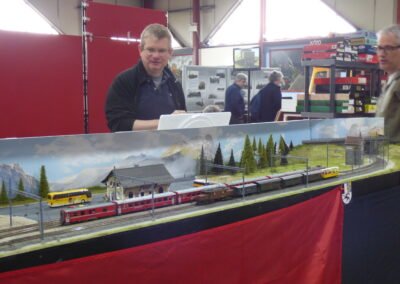 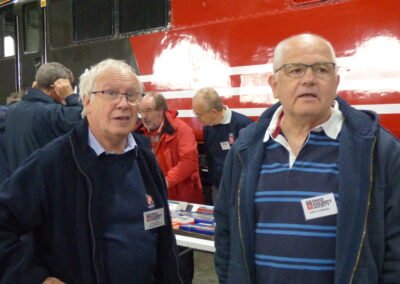 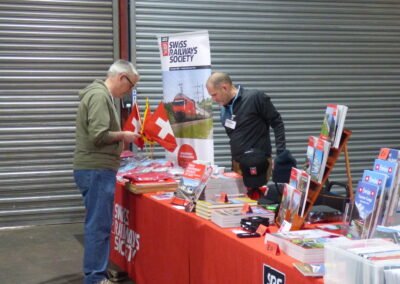 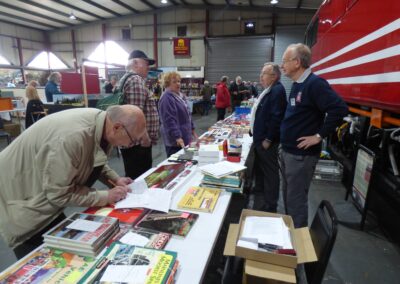 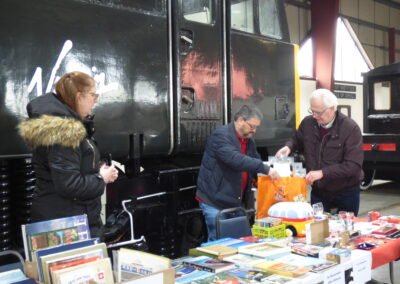 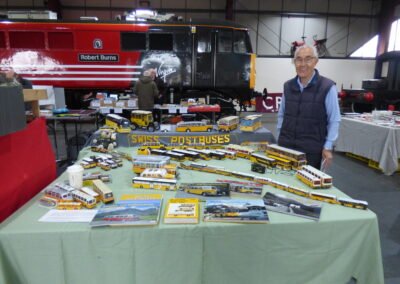 John Evans and his display of over 50 model postbuses 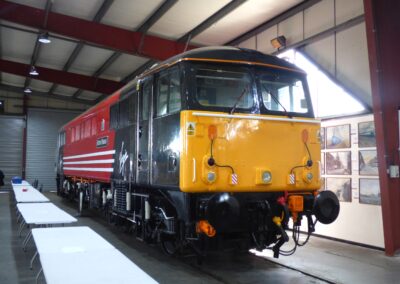 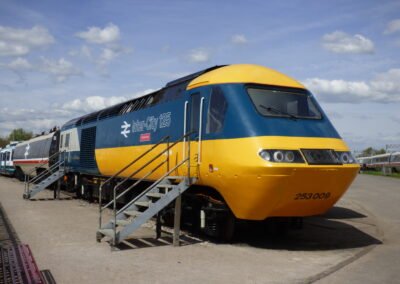 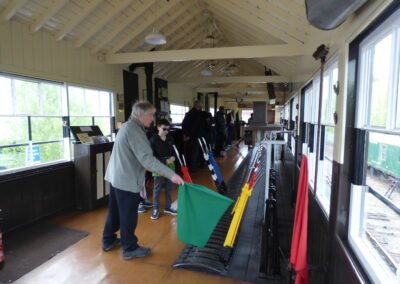