The branch’s winter season has now ended – details of next winter’s programme will appear here and in Swiss Express later.

Saturday 8th  May – Despite a forecast of inclement weather, 17 stalwarts of the West of England branch made their way to Buckfastleigh for a “behind the scenes” view of activities on the South Devon Railway.  The majority travelled on the service departing Totnes Riverside at 11:15, arriving Buckfastleigh at 11:50.  This train was formed of five coaches hauled by 0‑6‑0PT No 6412.  A few enthusiasts had travelled from Buckfastleigh at 10:30 on the first train of the day, just for the ride, arriving at Riverside at 11:00, to join colleagues setting out from there.  A small number, I am ashamed to say, eschewed rail transport altogether. 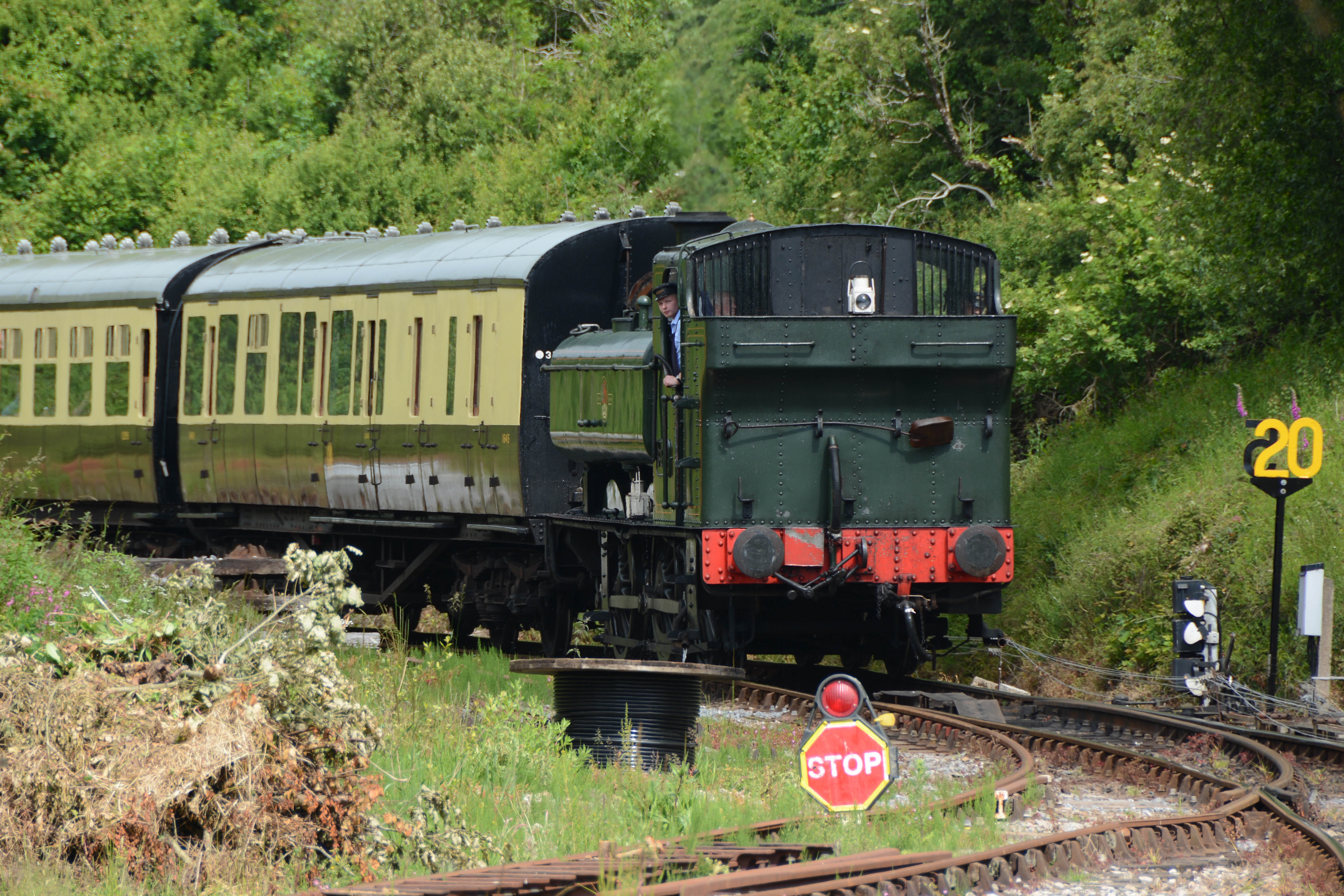 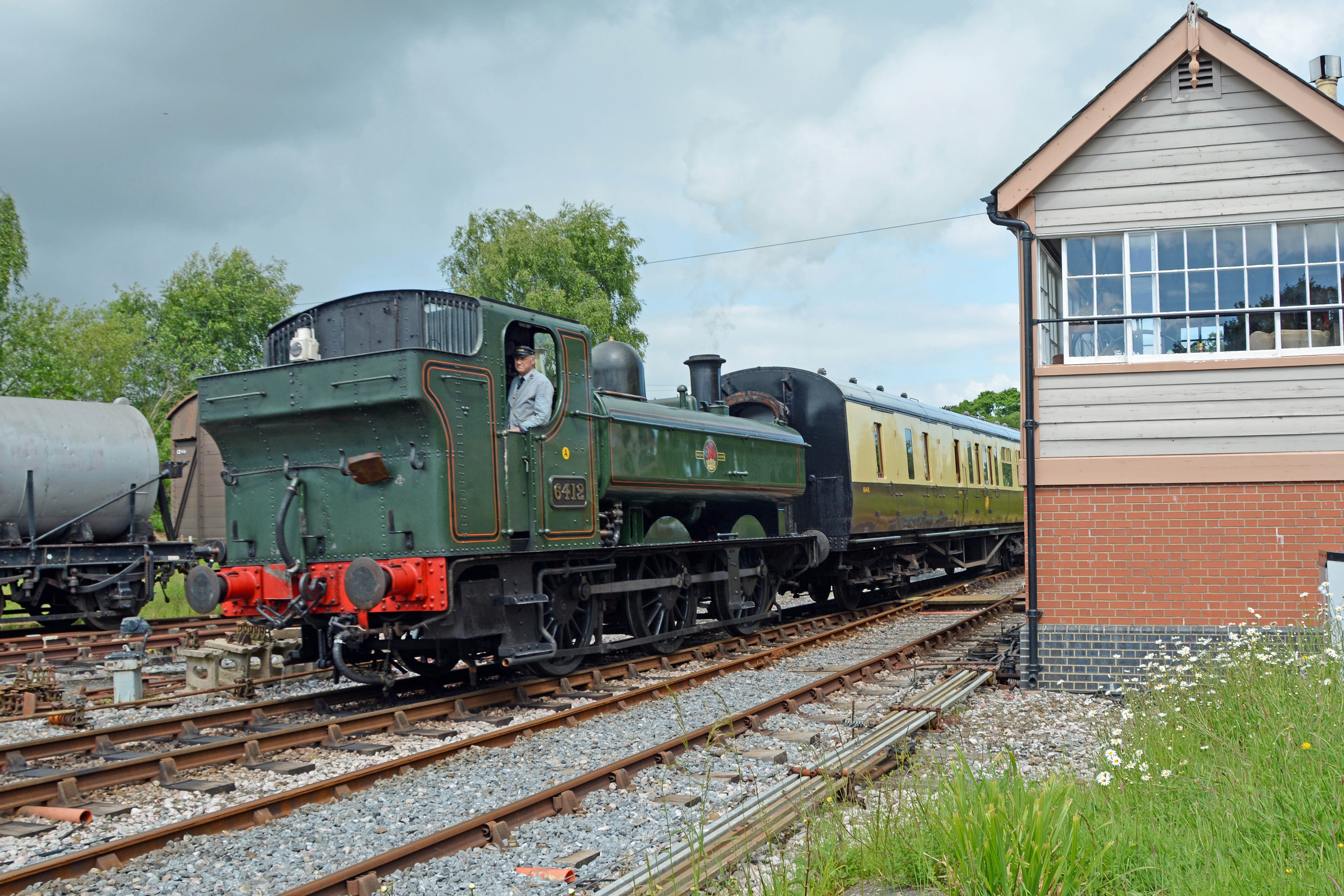 On arrival at Buckfastleigh we walked via the footbridge and attractive gardens to the workshops.  Most of our time was spent learning about the work done in two specialist areas – wheelsets and boilers.

The South Devon Railway is one of the country’s specialists in wheelset repair and railway wheel retyreing.  This work is carried out on the line’s own locomotives as well as on vehicles from other heritage railways.  Work is carried out to the highest of standards although much of it is undertaken with impressive vintage machinery. 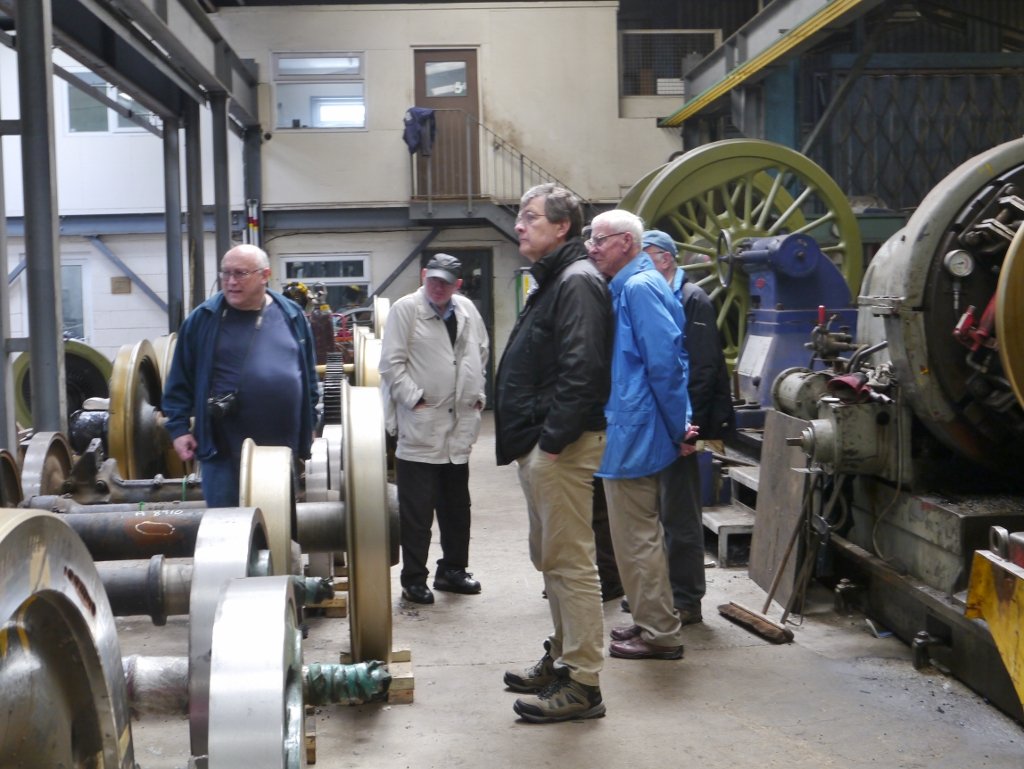 The South Devon Railway is also one of the country’s premier steam boiler specialists, with many years experience of manufacturing and repair.  As with the wheelsets, work is carried out using a range of tools and techniques, both traditional and more modern.  With our Swiss focus it was interesting to see the boiler from a BRB rack loco awaiting repair.  The workshop has also been working on a number of Bulleid Pacific boilers.  We were able to see one of these and the size difference between this and the BRB boiler was pretty significant.  The workshops have also started producing replacement ends for Mark I coaches.  The coach ends are quite vulnerable to corrosion.  The replacements now being produced at Buckfastleigh provide heritage railways with a very valuable source of replacements. 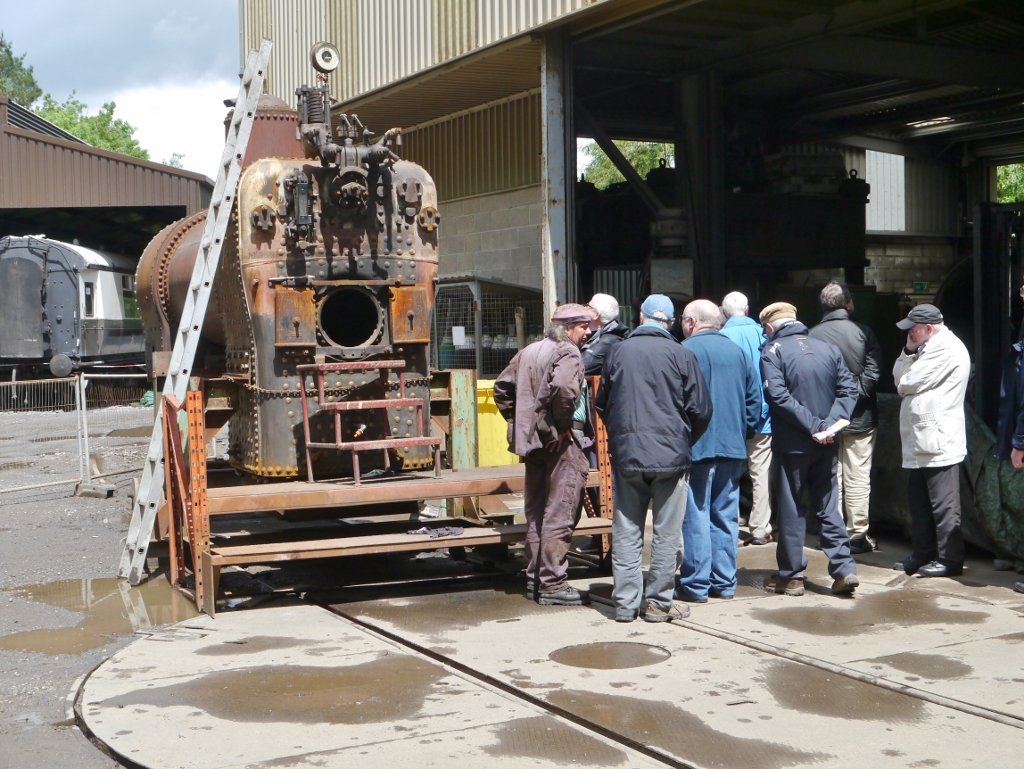 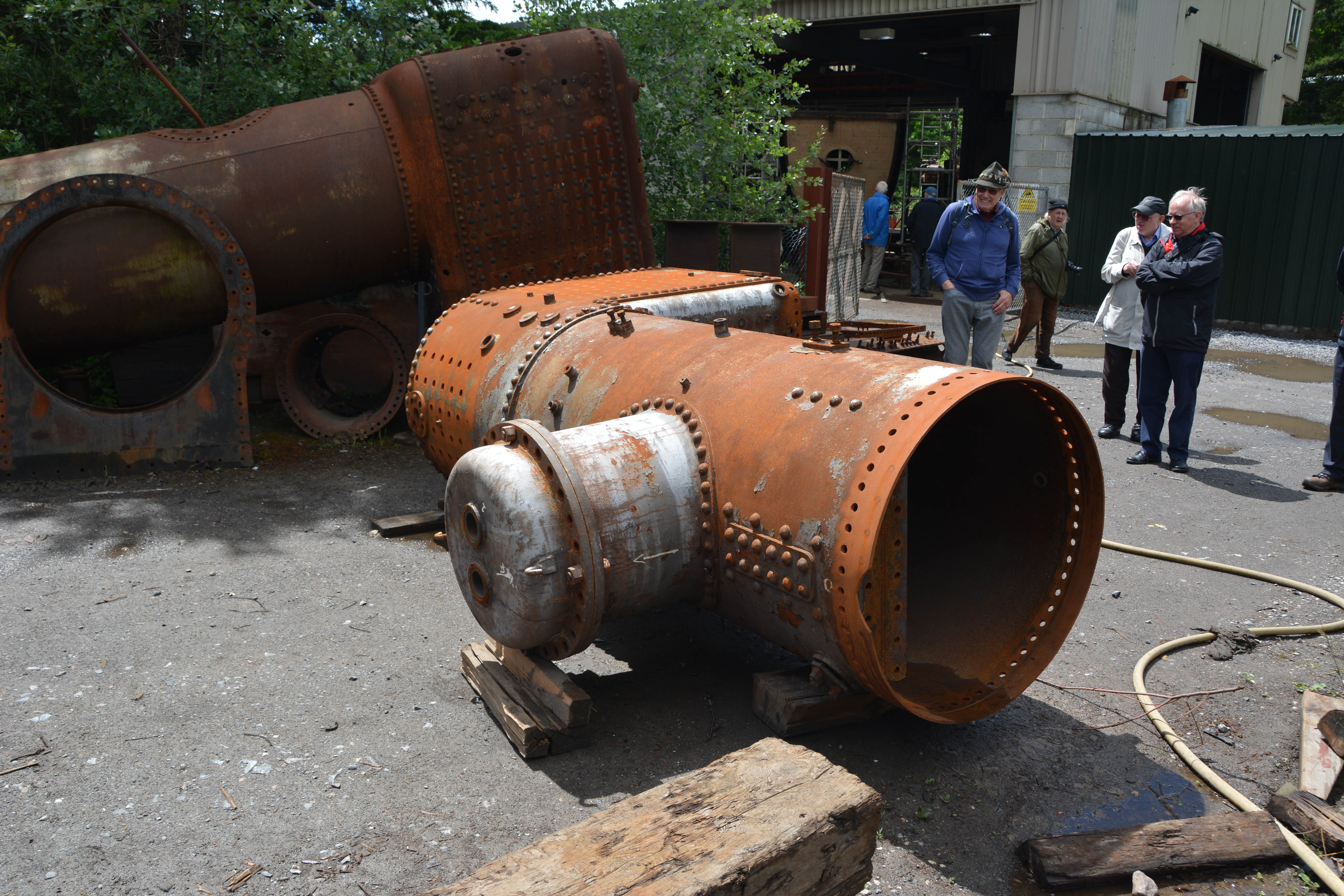 With thanks to our guide, SRS members then made their way to the refreshment rooms.  There seemed to be something on offer to suite all tastes.  There was time to see what was available in the shop and to admire the most impressive model railway, which was running faultlessly.

Most members departed on the 2:35 (14:35) service for the 35 min run back to Totnes Riverside, the train formation remaining unchanged.  Those who had travelled by car slipped away quietly, hoping not to be noticed.  And the weather?  No more than the occasional drop.  The anticipated inclemency was clearly overstated.  So, a very successful visit.  Thanks to all who had any part in its organisation. 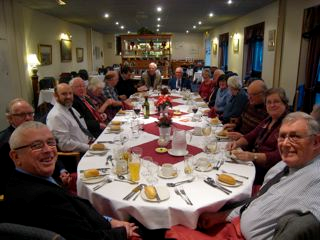 The 2016 Branch Annual Lunch took place on Saturday January 9th at the Passage House Hotel near Newton Abbot, where it is has been held every year since inception many years ago.  Pre-lunch drinks were taken in the conservatory lounge looking out over the river Teign on it’s way to the sea at Teignmouth.  The weather was duller than last year’s brilliant sunshine but at least it was thus cooler to some extent under the glass.

In the dining room, which we decorated with Swiss flags, bunting made up of triangular Swiss flags, and large Swiss pictorial posters, a three course lunch was  enjoyed by all the members and their ladies.  The excellent food and drinks were greatly appreciated and thanks were expressed to Rupert for organizing the successful event.

Conversations around the dining table continued well into the afternoon until it became necessary to disperse to enable the members from all over Devon and Cornwall to reach home at a reasonable hour.

Members and wives enjoyed a most enjoyable day on the tramway which runs on part of the trackbed of the former Southern Railway Seaton Branch between the town and the former now preserved Colyton station three miles inland. The low lying area besides the Axe estuary boasts two nature reserves with the corresponding range of wildlife easily visible from the upper deck.

Our tram on the outward leg was No.8 supporting a pristine Bristol livery. It was this tram that ran the first public service from Seaton to Bobsworth Bridge in 1970 towing a battery truck prior to the installation of the catenary. Todays tramway started life as a 2ft. gauge operation in Eastbourne but its success made that site unsuitable.(I actually rode on the trams while at the Eastbourne site)No.8 was actually built at Eastbourne in 1968 to 2ft. 9ins gauge that is todays standard. The final section to Colyton was opened in April 1971 and the catenary energised in 1973.

The sea front offers panaromic views Eastwards to Portland Bill, and Westwards to the towering Beer cliffs and beyond to Peco a name that needs no introduction to Model Railway enthusiast.

The return leg was on tram No.12. Built in 1966 at Eastbourne, since when it has had two rebuilds at Seaton the last in 1999 to resemble the London “Feltham” more enclosed design of the 1930s.

Good use was once again made of the station restaurant prior to departure to our homeward destinations in still perfect weather conditions. 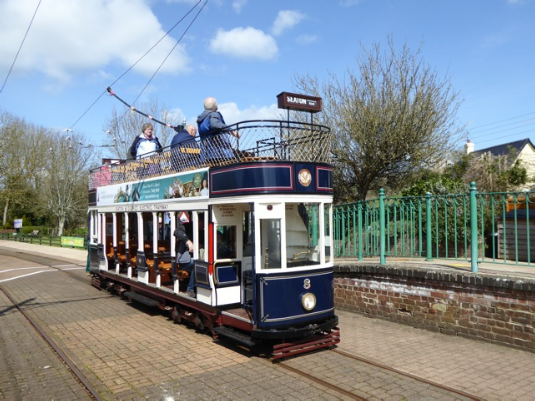 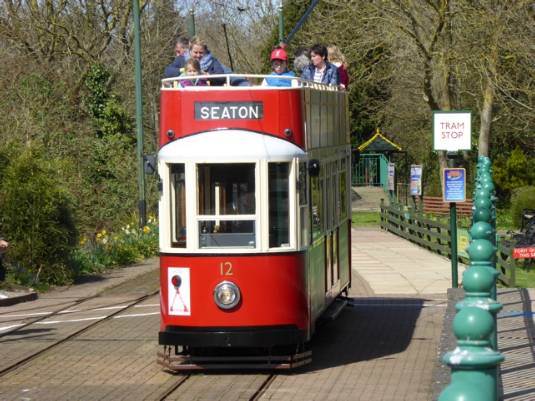